In 1983, inspired by Paul Theroux’s classic travel book The Great Railway Bazaar (1975), Steve McCurry started a five month trip to photograph the moveable city that is the train network across South Asia, carrying an estimated 30 million people per day. This trip started a long-lasting relationship with India. Some of his most iconic work was created during this journey.

In India, train stations are a microcosm of society. Life is lived on the platforms and on the trains with no distinctions between private and public life. People wait for trains with all sorts of animals in tow, the entrance halls reverberate with the noise of passengers competing to buy tickets, barbers cut hair or shave their clients, shoes are repaired, food is served, animals are brought to market. All this activity is a dream for the photographer.

Our first image is of bicycles on a train taken from the platform, a classic Steve McCurry photograph telling a human story of everyday life and which captures a precise moment in time with his signature saturated palette. There is much to take on in this image with four great portraits each framed by the windows of the carriage. It showcases the crowded conditions and the ingenuity of the passengers hanging their bicycles from the outside with their wheels creating four circles juxtaposing the four square windows and suggesting that the voyage will continue beyond their long journey in the carriage. 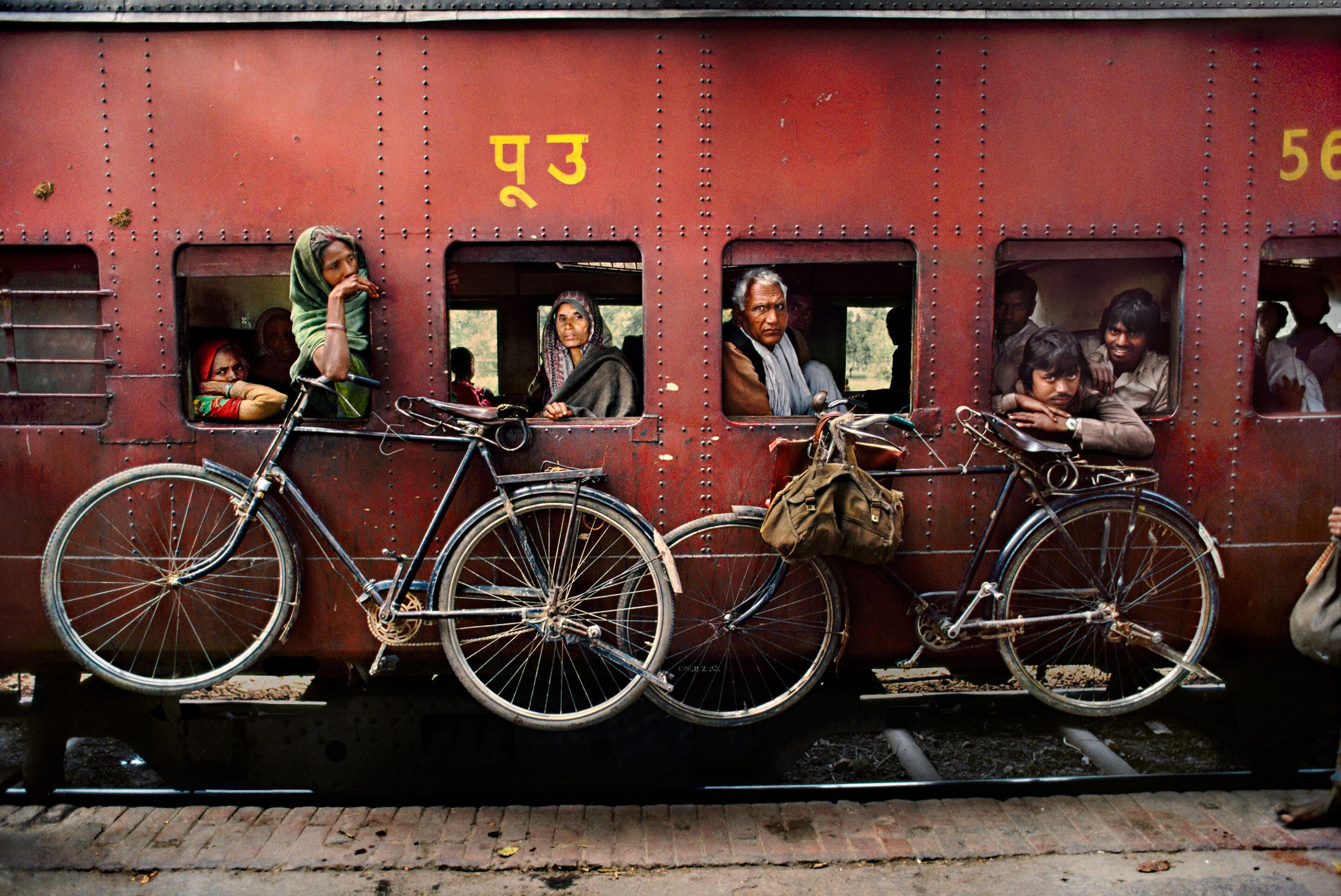 Steve’s advice is to take notes, to observe, and things will start to reveal themselves, scenes that were invisible before. Steve often broke up his journey to stay in one place for hours or days. During such a break in Agra, Steve spent days photographing trains passing by the Taj Mahal.

“By chance, I was walking down the track from Agra Fort Station. I could see the Taj in the background of this enormous rail yard, so I waited, and suddenly they started moving these steam locomotives in front of it. You can feel the continuity between past and present.”

– Steve McCurry in Untold, The Stories Behind the Photographs (Phaidon)

In this photograph, Steve contrasts two symbols of India: the steam train and the Taj Mahal, utilizing an exquisite juxtaposition of the aesthetic with the obsolescence of technology. It also records a moment in time that no longer exists, as even these train tracks near the Taj have disappeared. 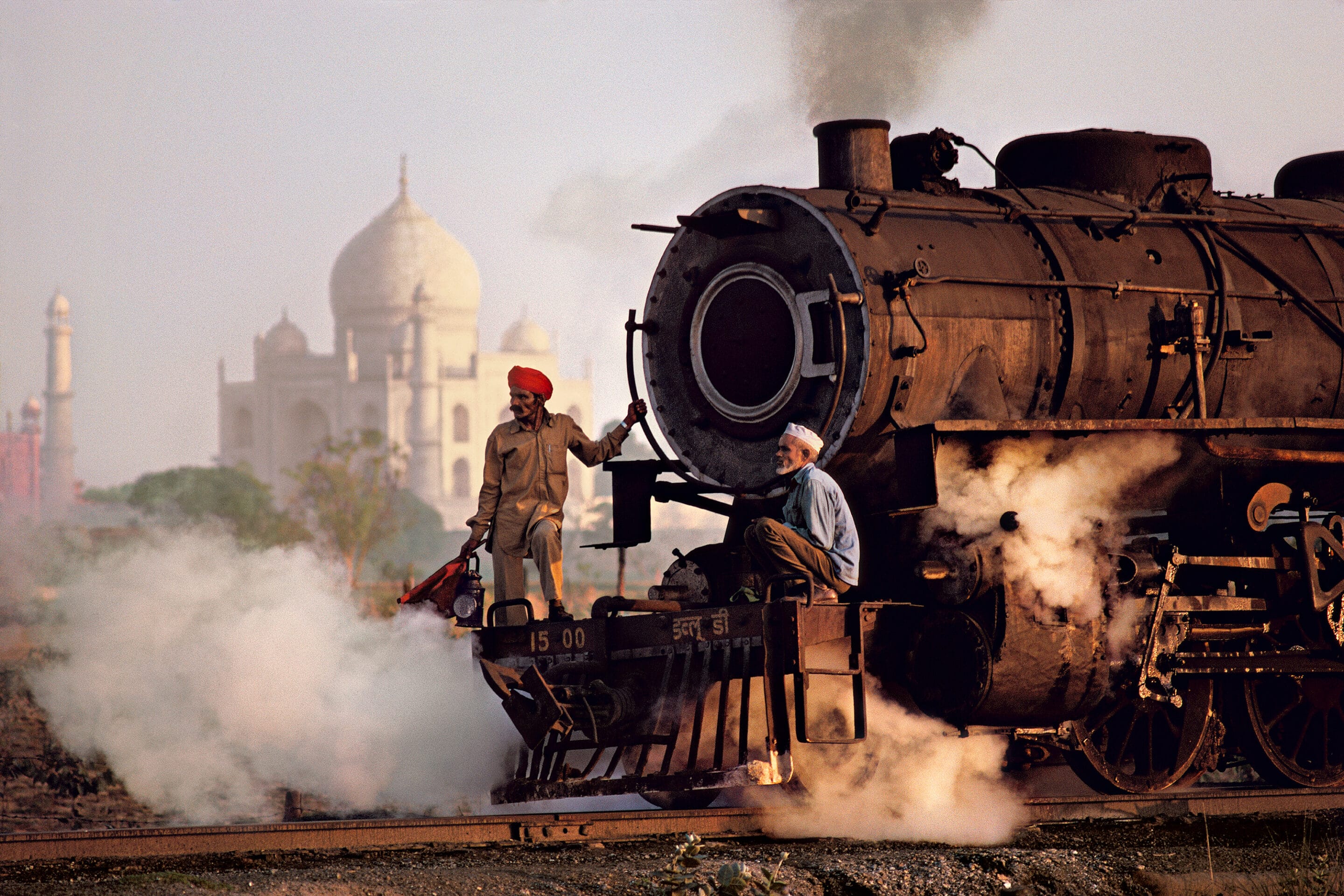 Steve’s portraits are notable for the intimacy he’s able to create between the subject and the viewer. He manages to capture fleeting moments in the subject’s eyes and facial expressions, with great respect and empathy for the people he photographs. He often uses a wide-open aperture to make the subject stand out from their surroundings, using his incredible eye for colour. These elements are all in play in the portrait below of a railway engineer from the Himalayan foothills around Landi Kotal. The terrain and extreme weather make the maintenance of the old tracks a never-ending effort, evidenced by his weather-beaten face.

Another example of Steve’s fabulous portraiture and his eye for colour is illustrated below in the photograph of a Bengali woman and her son looking through the window. The juxtaposition of strong colours between the carriage and the shawl as well as the piercing gaze is very powerful. In addition, Steve uses the carriage’s window to create a frame within a frame.

The rich colour which is central to Steve’s oeuvre is also shown in this image of a platform in Old Delhi with a fading sun which gives the image a golden glow. In this image, the light is almost palpable. The roof of the station and the train create lines against the light that lead the eye towards a decentralized vanishing point. The different characters dotted around the platform and their shadows, particularly the man reading the newspaper, create this feeling of a suspended moment in time. 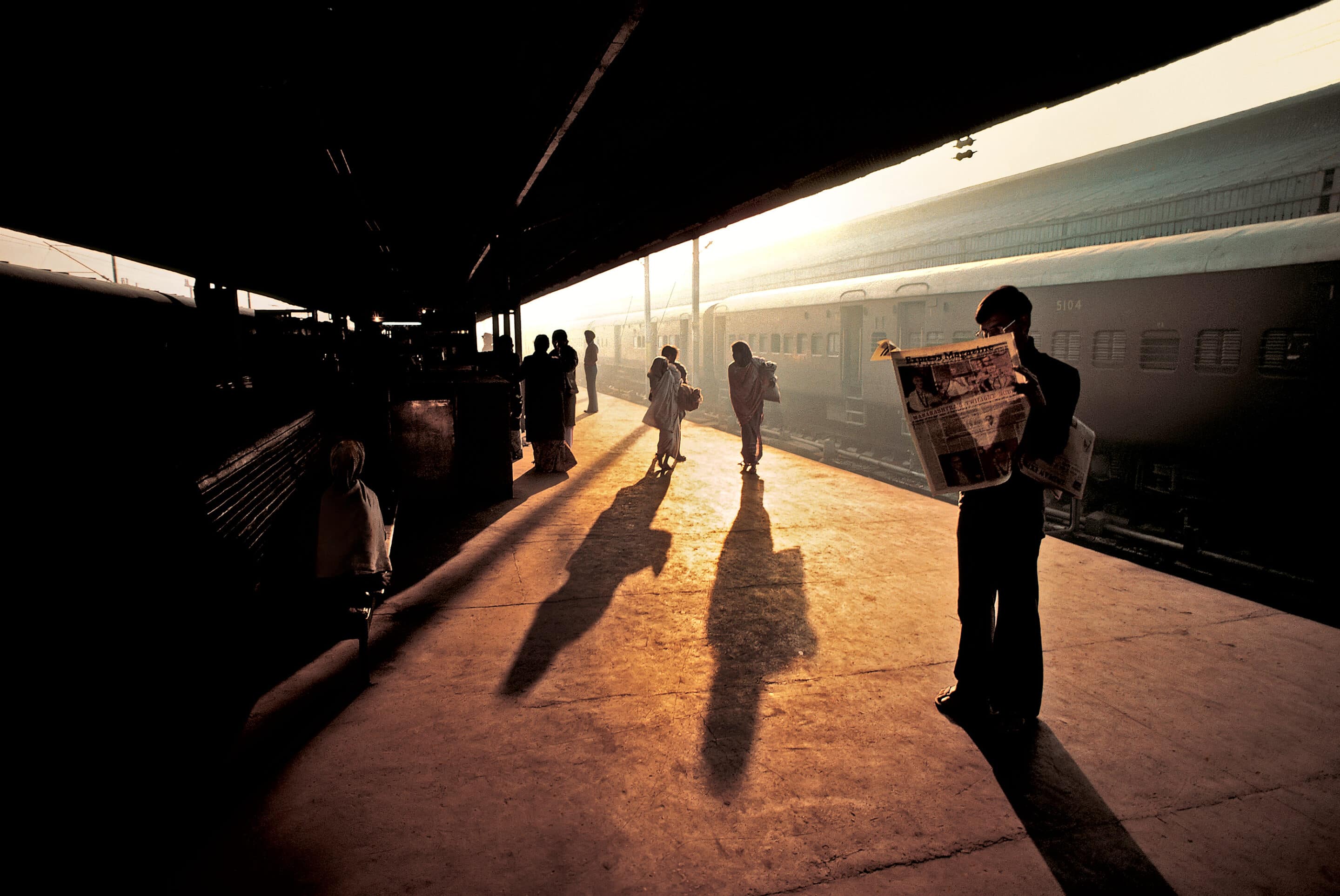 If you want to learn more about Steve McCurry’s photography, check out his online photography course.