Albert Watson: BBC4 Video, What Do Artists Do All Day

Watch this BBC Four documentary following Albert at work over the course of a day.

Broadcast in 2014, this wonderful BBC Four documentary follows Master Photographer Albert Watson over the course of a day as he photographs the barren, beautiful landscape of the Isle of Skye in Scotland.

For anyone thinking about joining the Masters of Photography online course, this video is a superb introduction to this legendary photographer at work to experience his friendly and informative teaching style.

To see the full Albert Watson masterclass, and gain an insight into his photographic techniques click here.

This fantastic documentary, first broadcast in 2014, provides a wonderful introduction to one of the most influential and acclaimed photographers of our time. By his own admission, when at 12 years of age he began using his father’s box brownie camera Albert was hooked. He knew from the very start that this was what he wanted to do for the rest of his life and, at 71, he’s going strong, being more creative than ever and completely living up to his own predictions.

The documentary called, “What Do Artists Do All Day”, follows him for a day as he heads out into the wild and barren landscape of the Isle of Skye on a shoot. It begins, however, with an introduction to his most famous work as a fashion and portrait photographer. For more than 40 years he captured some of the most recognisable and important images for magazines like Vogue and Rolling Stone.

Albert has never really settled down in one genre, working across numerous fields including portraiture, fashion and landscape. He’s lived in America for decades but continues to come home to Scotland regularly and, in his own words, the country is never far from his thoughts, because when you live in one place for 25 years it never really leaves you.

Capturing the Beauty of the Isle of Skye

For anyone considering an Albert Watson course, this documentary is a perfect taster and an exciting look into the very first fine art project he embarked upon back in Scotland. He harbours fond memories of camping trips in wild weather with his family when he was just a boy, and strongly remembers being struck by the Isle of Skye’s sense of mystery. A feeling that still inspires him today…

Using the Weather and the Light

With the country’s notoriously inclement weather at his shoulder he jokes in the first few minutes of the documentary that his next project would be in the Caribbean! He talks about the weather being a vital component of this project and the very reason he planned it in October, when it would be more aggressive and unpredictable. Far from being put off by clouds or rain (and even extreme cold), he actively chases the weather in order to inform his work and evoke the feelings of his childhood experiences.

The light in this place is absolutely unique, the Master claims. To explain, he says that while of course the sun is the same anywhere in the world, the particular humidity patterns and clouds that come through here create a very unusual and ever-changing palette of light.

Through the documentary, it’s fascinating to learn how this master photographer meticulously plans how he wants a project to look in his head first, by focusing on certain words to give him an ‘intellectual’ guidance. In this case he has conjured up words like ‘mysticism, ‘a different and surreal landscape’, ‘Lord of the Rings’ and ‘Victorian romanticism’ to remind himself of the effects he wants to portray.

One of the things he notes is that, as a photographer, if you’re to be successful you need to learn to dominate the landscape rather than the landscape dominating you. The documentary is particularly interesting to watch if you’re familiar with the finished images from this Isle of Skye project, as it shows the majesty of this vast, strange and eerie landscape in context, and how he has indeed achieved that goal.

Interestingly, you’ll see how he sometimes rejects certain scenes as being ‘too pretty’, because that’s not what he’s looking for in this project. He has a very clear idea in his head of what he wants to achieve and he’s faced with the not inconsiderable challenge of translating that to his images. (At one point he says that he was terrified that he’d come to Skye and leave with a bunch of picture postcard images, which is the exact opposite to what he wanted for this project.)

The documentary gives a valuable behind the scenes look at what goes into a project like this. The conditions are not comfortable, with rain a constant presence. But the master photographer certainly doesn’t travel alone and the shoot involves numerous people to assist him setting up, carrying his heavy equipment, holding umbrellas to counteract the strong wind and generally free him up to ensure his time and creativity can be maximised.

One of the great strengths of this 15-minute documentary is that in between following him on the day’s shoot on the Isle of Skye, and seeing him working practically out in the field, it is spliced with several sections on how his career has developed over the years, including the story of his career breakthrough (an Alfred Hitchcock portrait shoot for Vogue), other celebrity encounters, and how he came to develop his iconic and much-admired style.

For anyone interested in fine art photography, this documentary is very useful to consider how different shooting a landscape is to fashion and portraiture photography, but how this incredibly creative and talented man takes on the challenge with his own style and personal philosophy.

Think you’d benefit from the teachings of this legendary Master photographer? An online Albert Watson course allows you to gain a genuine insight into the mind, creativity and techniques, to learn in your own time and at your own pace.

Masters of Photography has partnered with some of the world’s most important and influential photographers for our acclaimed online courses. The course is ideal for people of any skill level and allows you to gain lifetime access to the lessons so you can learn at your own pace and in your own time. We offer a full money back guarantee if you’re not completely satisfied and it can be delivered to any device.

The lessons encompass a wide range of topics including practical and technical aspects like studio set-ups, working with models, preparing for a portrait, composition, light and more, but also focus on getting an insight into the Master’s own ethos, practices and creative inspirations. 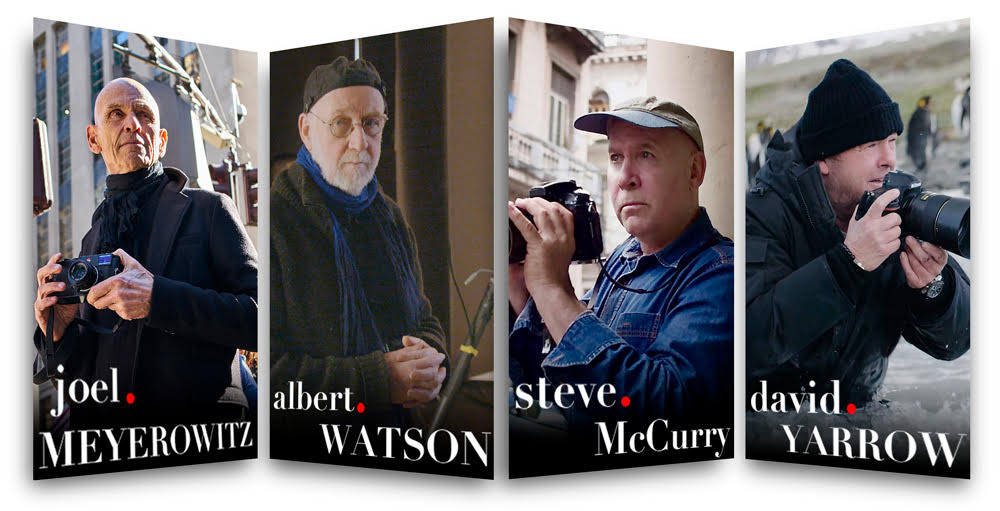