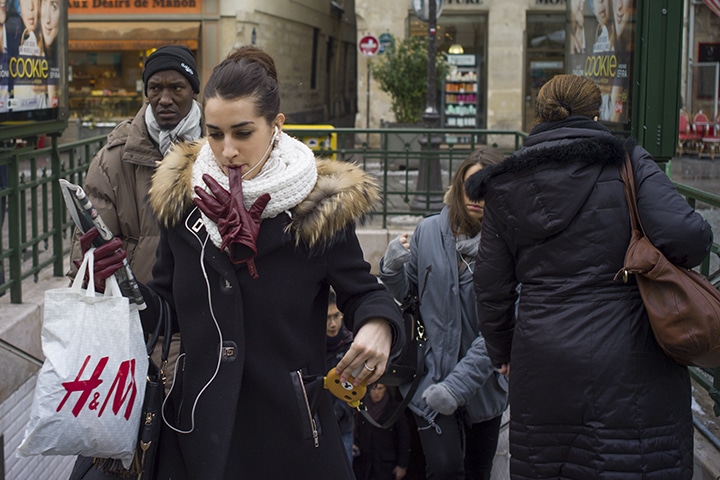 I was going through the work from the 21st for today’s Blog and what do I discover but a funny coincidence. In among the 65 photographs I made, here, again, was another young woman with a glove hanging from her mouth! What are the odds of that happening?  And it was even near the very same place as the one from January 19th. 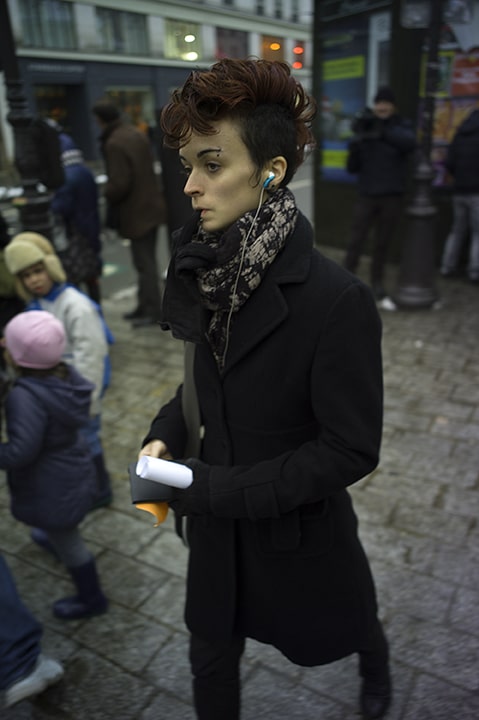 Of course it is a wholly different image, less of a portrait and more of a general slice across the late in the day street hustle. Still, there are lots of small things to notice, like the 2 tiny heads above and below her hand, which, if you really are looking all over the frame, give up their small pleasures at being discovered.

However, it’s not a great image, just a workaday photograph made in an effort to stay sharp out on the street, which, in some ways, is just as important as making a really tough photograph, because keeping one’s instrument tuned up is part of the larger game of sight. 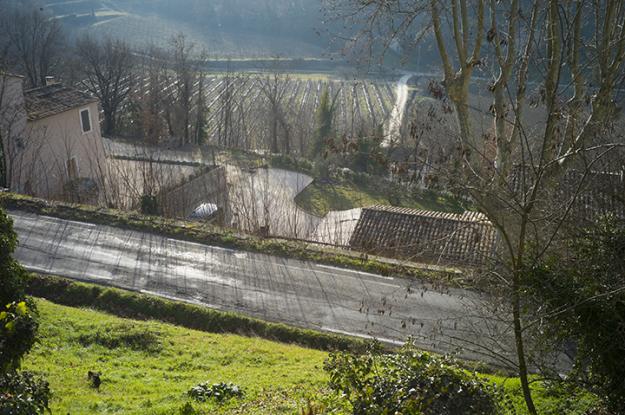 On the way back to my car I saw the daylight changing and glowing in its own natural way, not to mention the lovely complexity of the layers, and I am sure that my response was in relation to that window I stood in front of a half hour before. The green! and the glitter of the light on the land, although less intense than the window, were nonetheless wondrous, as only nature can be. How many times daily do I stop and say, ‘what beauty’!

A Bowl of Mussels 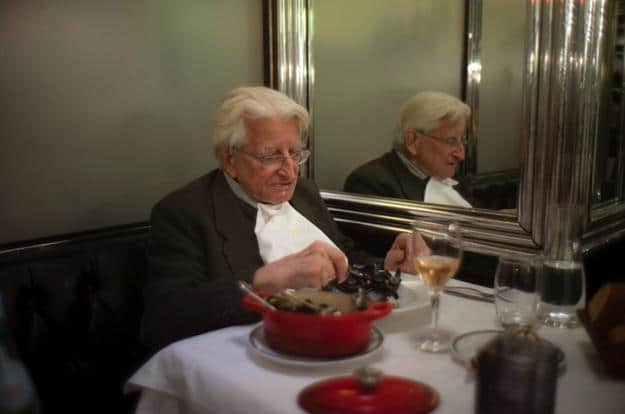 All alone, deep into the concentration of his solitary experience, and really enjoying himself. It made me happy to see the gusto with which he devoured the bowl of mussels.

Getting to Know Them 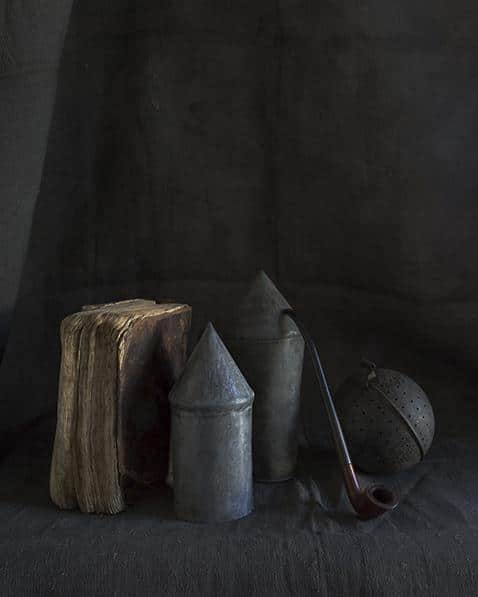 I found myself collecting strange cast offs in the local flea markets recently. I’ve never been much of a collector of objects. Having so many thousands of photographs, stacked nearly floor to ceiling high on the shelves of my studio, I always thought I had enough ‘things’ already. But these old odd forms that call out to me are suggesting themselves as worthy objects to consider in some sort of still life way, still lives being something that never really were part of my vocabulary as a photographer until last year when the urge first came to me.

Since then I periodically find myself simply staring at some of these objects and turning them slowly around so that each new aspect of their form reveals another possible shift in my first or overall impression. It is as if their truest expression of their ‘objectness’, their ‘personality’, suggests that I stop and look harder – which is what I think photography is really all about – looking harder at what we may think we already know – and by doing that I get glimpses of their hidden sweet spot, and once you know where that is you want to explore it.

This image is more of an introduction to the new arrivals than a worked out still life. It’s what I do first to see how they stand, their relationship to each other, the way the surface holds the light, the sense of scale they emit in the space they occupy. Surprisingly, some small forms present a sense of scale greater than their real size, and it helps to know that about them for future use. It’s kind of like an audition where the cast of new arrivals struts their stuff for the director. Today the book and the pipe came home with me and we are getting to know each other.

A Book and a Ball 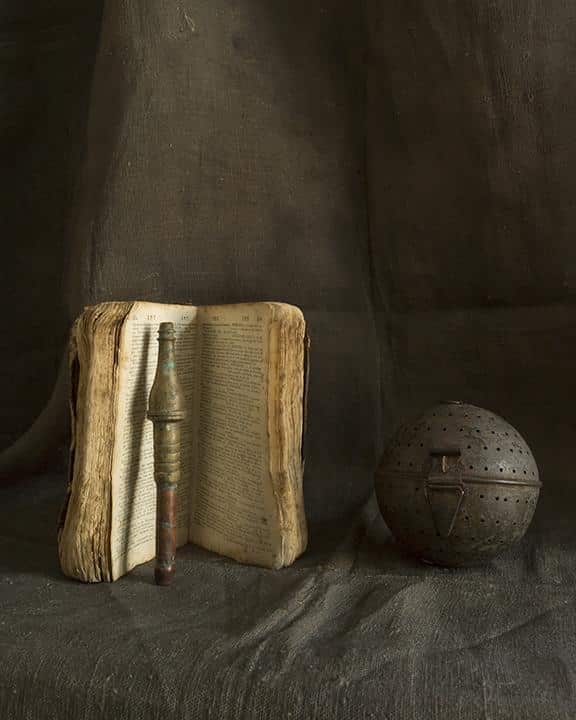 A few days ago I made a still life of two pipes standing on this background. Of the two this one remained standing while the other took a nose dive which I read as its desire to get off the set and go back to being a pipe. Then along came a book and a ball shaped object that has a latch and a lot of holes. I can’t explain why they seemed to belong together, and it won’t be for long in any case, but for this hour they were my curious companions.

When I look at the image now the first thing that speaks to me is the shadow of the pipe on the page. The longer I look at it the more it seems to be studying the text. Or maybe my attraction is to the space between the shadow and the pipe, just so close, and yet a tiny space remains between them, which of course I put there as I moved things around. That space delights me!

More than that I don’t know. It’s a work in progress, and as such maybe tomorrow I’ll resolve what to do with the ball, and also have another understanding of why any of this matters to me. That’s the way with work that keeps me company in the studio, it is always available to be reconsidered. 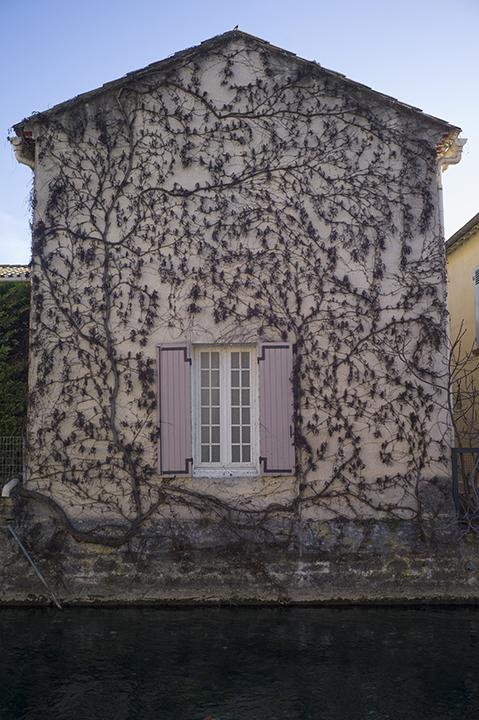 Some days the images that stop us come out of our accumulated past. I see something that I know I have seen a thousand times; in this case the facade of a house, simple as the fact of its being. An honest exaltation of, “I am.”

This ordinary house, along a canal in the town of L’Isle-sur-la sorgue is embroidered by Nature’s hand, which, now that winter has struck the shiny glitter of its ivy leaves to the ground, is showing me the unstoppable force of a single root which has taken dominion over the entire surface of this building.

I was stuck dumb with admiration for the complexity and sheer visual, graphic, beauty of this circulatory system, for surely that is what this is, a root dipping its toe into the waters of the canal below the house.

And isn’t this what we hope photography can reveal to us? A moment of innocent wonder at the gifts that nature, or mankind, offers us, and the power it has to set us free to simply take in whatever meaning this, or any other form of unexpected beauty presents.

Take your first step to better photography by taking an online photography course with Joel Meyerowitz.