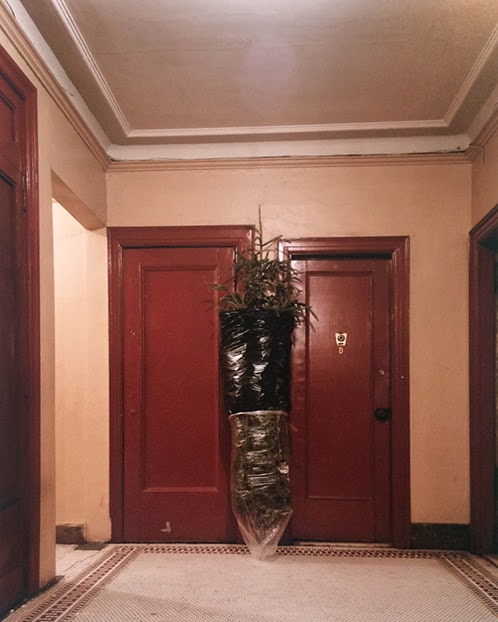 All the celebrations are now over and reality makes its way back wherever we look, and looking is what we always return to to ground ourselves. Looking at our daily life, our family (just as crazy as everyone else) our politics, and politicians (what a ride we’re in for) our work, our street, or city, everything that’s right there in front of us. All of it fresh once again for thought and eye. 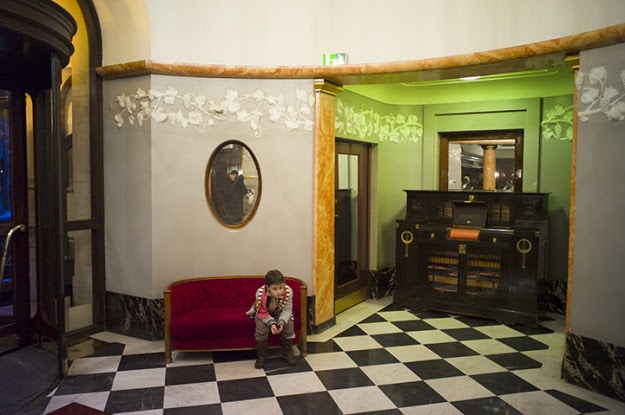 I came through the revolving doors into the warmth of the vestibule of the hotel, paused for a moment to take off my hat and gloves, and then caught sight of this kid sitting there like a little puppy waiting for his master. Something about the scale of the boy, and then the strangeness of the whole space; that room to the right, with the slightly underwater glow, and that crazy instrument from another era, circa 1900 I would guess, a piano roll, or reproducing piano I think it was called – look at the size of that thing! and think how far we have come and how we carry our music around with us today!

But what was really happening, as it so often does, was that all of it suddenly filled me with a quickening of the pulse and the mind, which made me stop and really look at just where I was! Moments like that are expansive. Everything comes into play. I look all over the frame to make it register clearly, and out of that disciplined looking sometimes an interesting photograph comes. 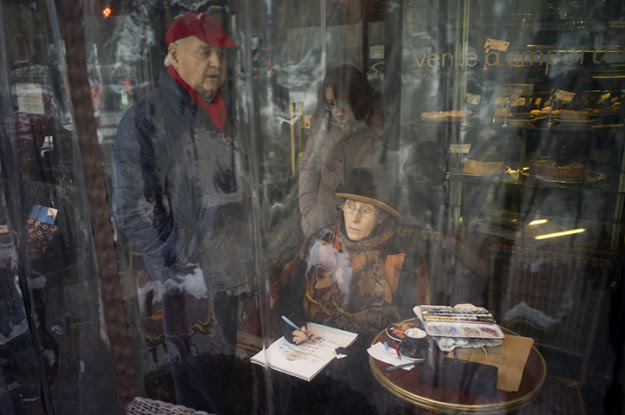 Back on the street I passed a cafe where a woman was drawing, and again an interior space made me stop. This time it was a more ambiguous space that caught my eye, but also the hard focus of the woman within, which made me take the moment and carry it off with me. It always astonishes me when themes arise, however loosely, on any given day, and connect disparate, non-events to each other, which then, sometimes, keep adding up.

This Is Not A Pipe….”Ceci n’est pas une pipe“, Magritte 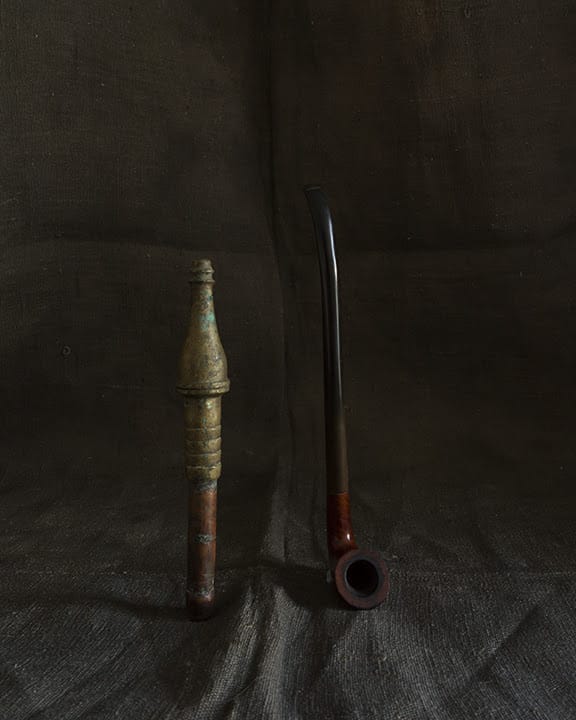 I came across this pipe (which?). It was lying innocently on it’s side among a lot of other lost souls in a stall filled with castoffs of all description. So why, as I passed by, did this unnecessary object call out to me, a call which I barely heard amidst the din of all the glittering and shapely spent objects? It was a pipe. And I heard that long remembered Magritte line;”Ceci n’est pas une pipe“. But it was.

When I saw it in my own collection it fell in with this brass and copper pipe, something that once might have been in the mouth of a fish, or a face on a fountain. One pipe weighs nearly nothing and is silk in the hand, while the other has gravity and weight, and is cold to the touch though warm to the eye. They seemed to want to be together. That suggestion coming to me was so timid as to be just below consciousness, but I heard it, the Zen Bell I always hear when it calls me. I’ve learned to listen for it.

On the hand made background (more about that some other time) they came to life and played together, and something like a force shivered between them, and they continued to fall against each other until I found their balance and poise. The cloth added a note as well. I was in thrall to the light, and the dark, and the way their character, independent of each other, and together, emerged.

I was taken in. 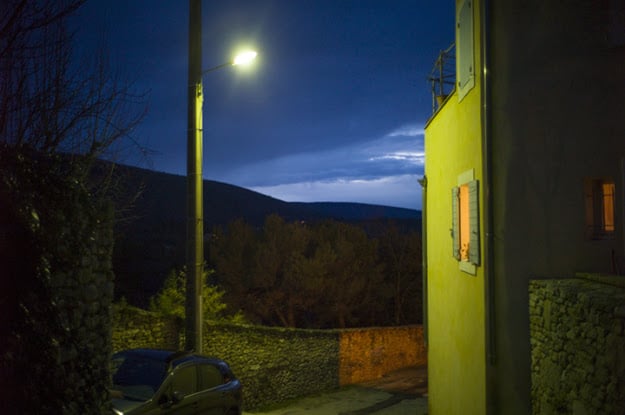 The lesson is; always carry your camera!

We were having dinner guests and Maggie, realizing we needed a fresh baguette, asked me to trek the 100 yards from our house to the baker. So out I went, and as it’s my habit to always carry a camera, whether it is 100 yards or a hundred miles, it gave me the chance to pause on my walk back to take in the spectacle of this nameless corner in a small town, in the Luberon valley, in the southern part of Provence, just as nightfall brought a rapture to these old walls and hills. And to me.

To stand here and breathe in the colors, because I believe you can breathe them in, how else to account for that surge of knowing something, which comes from standing still some place and simply being, breathing in the all of it in that particular moment. And so what if the moment is illuminated by street lamps and window light, and the colors may seem a little garish. In fact it is the union of the two competing sensations that brings them into their momentary harmony.

Just to look at it all for what it is, is enough to fill me up with wonder about how remarkable, at any given moment, our world is. 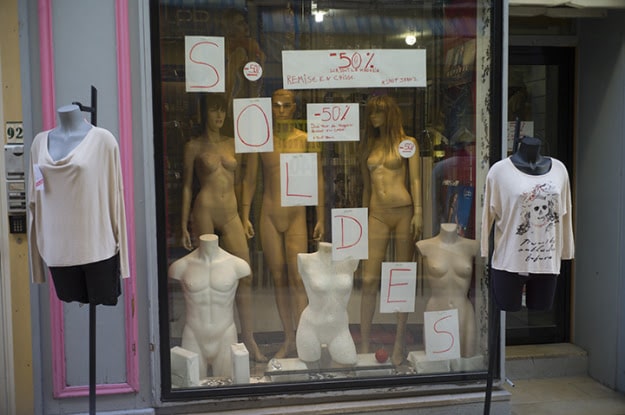 It must have been a fantastic January sale, even the window models lost their clothes! I see things like this on the streets of New York all the time since they change the windows a lot faster there, but to be in a small, French, agricultural town, on a back street no less, and to turn the corner, on a late and grey day, and come upon this window was quite a pleasant surprise – and let me tell you there was no one else on the streets, as is so often the case in French towns – where do they all go?

This kind of photograph is like shooting ducks in a barrel. It’s all there already, and all I have to do is stand in front of it and put a frame around it. And I probably have made more than my share of these kinds of ‘record’ photographs. But what do they record? And why bother to make it again and again.

Well, when I am out wandering and nothing much is going on, then anything that has a sign of life seems to be of interest. And in a way it’s a little like ‘priming the pump’, if I make a shot like this I feel somewhat freer, because something happened! It feels good to be called out of the lethargy that can come over all of us when walking in strange, often quiet towns. It’s like a warmup, or a stretch.

So it records a moment of engagement for me, and it also records what this particular time, in France, in a small town, in the 21st century looked like. It is also a reminder that throughout the history of Photography this kind of image has called photographers to account. Think of Atget’s great photographs of windows with mannequins. Not that this has any bearing on his image, but whenever we connect with the past we keep the continuity of the medium going. And one never knows what might happen next because you stopped here to look, spend a few minutes thinking about what you are seeing, and then life resumes again and sweeps you away.