Antarctica is a challenge to photograph in a way that is engaging to those that will never have the chance to visit – its enormity and its power are difficult to convey in one still image. Tight shots tend to work less well than wide-angle imagery that portray a sense of place. However, this photograph is my one exception to the rule. It has an aesthetic simplicity to it which none of my other images from Snow Hill could match. Emperor Penguins walk in single file and the file can be long – so a 90-degree angle is perfect if the ice structure and your stamina allow you to get there. 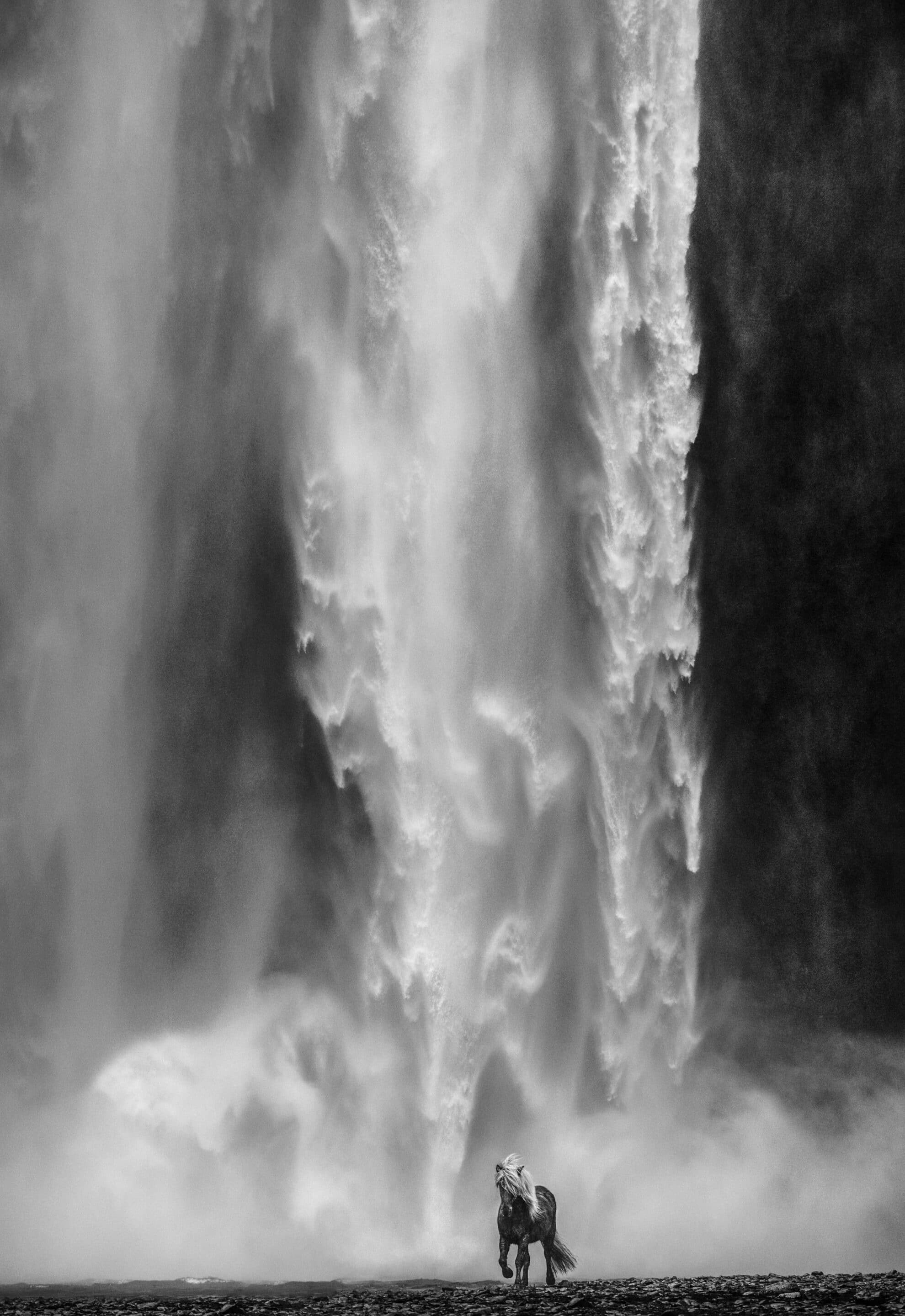 Everyday – 365 days a year – Iceland is invaded by photographers. Make no mistake – the secret is out. Photography enfranchises everyone and everyone deserves the right to take a good picture – indeed anyone can. I would bet that if there was a ratio of national population to annual visitor instagram posts, Iceland would win by such a distance that the silver and bronze medal winners would be embarrassed to be on the same podium.

In my previous 9 visits on assignment to the country, I underperformed, because in retrospect, I think I failed to fully convey the enormity and rawness of the landscape. The cognitive processing of the minute by minute visuals either side of the ring road around Iceland is challenging and I think it requires a few disappointments to really get it right. I think my contextual pictures of Icelandic
horses before this trip have been nice rather than spectacular, and I – for one – loath the word “nice”.
.
When I go to East Africa I want to take images that have some serenity and calm. I don’t capture predation and I prefer to capture animals just being animals. I think I have made a mistake previously in repeating that approach in Iceland. Iceland is not serene – it is angry, wild, raw and dynamic. Therein lies the clue – big images of Iceland probably need to major on these characteristics.

It’s taken time, but yesterday morning, I think we finally got there. There is energy and a sense of scale. In fact, it is really all about the sense of scale. The horse is beautiful – but that is a given – Icelandic horses have genes on their side. 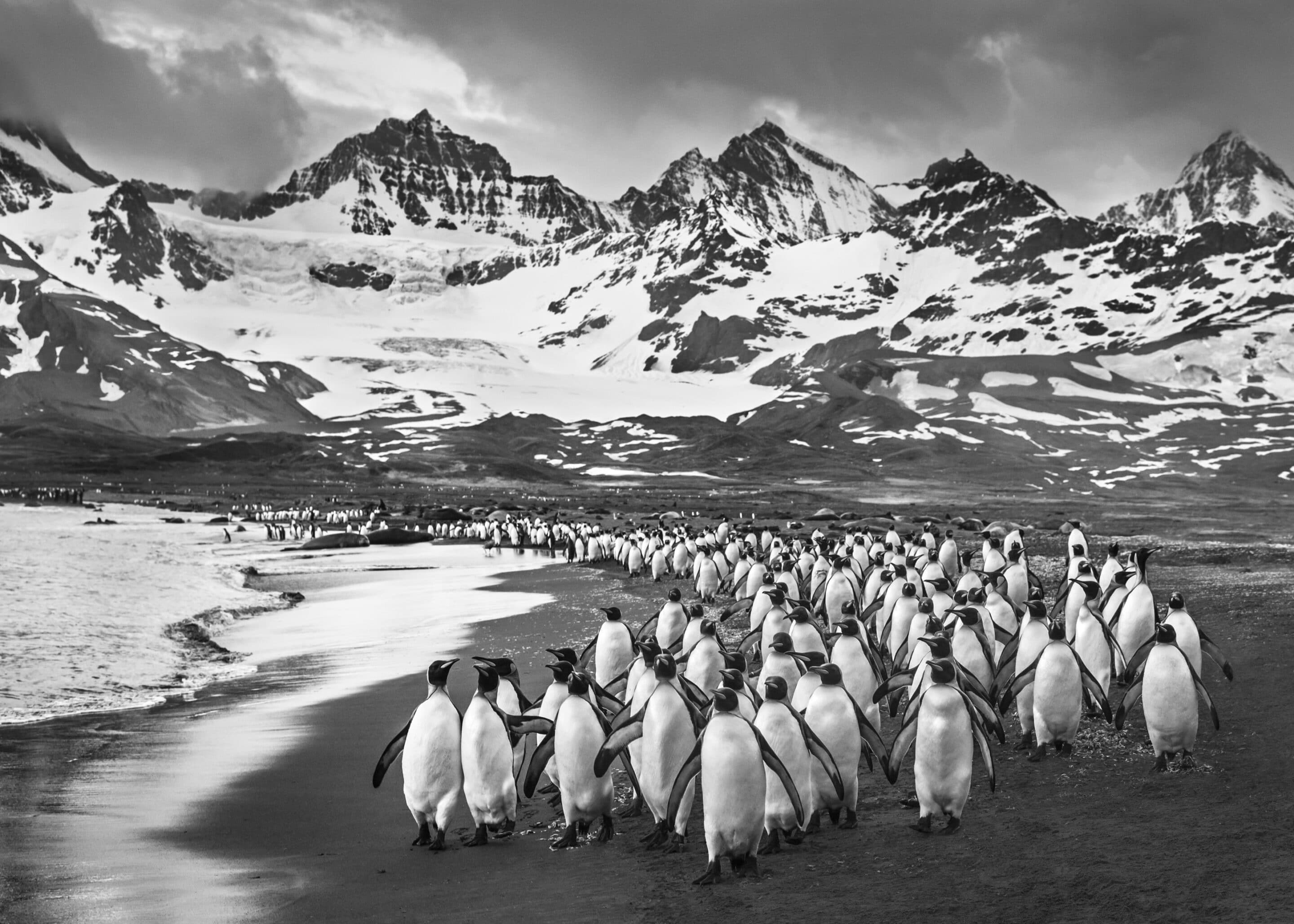 I had a clear preconception of what was necessary to take a powerful image in South Georgia. My overriding goal was to capture a sense of depth and a sense of scale. South Georgia is raw and dramatic with many fiercely steep mountains towering above the wildlife and to exclude them from an image would risk telling only half the story. These mountains define the island.

The riddle is that to include the Everest like peaks and also the wildlife on the beaches below risks the image being too loose – there must be detail in the foreground and this necessitates proximity. So I am wanting everything and that can be a challenge in low light. I dwelt over this dilemma for many hours on the way to South Georgia and I was reminded that simple maths often plays a lead role in making an image.

The lens best equipped for the challenge of giving depth as well as foreground detail is my favourite Nikkon 58mm F1.4 lens – it is the most important piece of camera equipment I own.

The first day on St Andrews Bay, we landed on the beach at 4.40 am, but this was too late to set up and then capture the soft early morning light. By 5.20 am, on a clear summer day the light is already too harsh and the King Penguins are lit up like Christmas trees. It is too much. So the following day, the whole team was on the beach by 3.50 am.

I had my moment in the corner of the beach at about 4.40 am. I knew that’s where the big groups of penguins marched for their morning fish and the light – whilst low – was just strong enough to give the penguins a little “ping” without being too visually loud or harsh.

I chose a D5 camera simply because I thought the more shots per second, the more the chance of the penguin pattern cooperating in the one shot – I know to my cost that armies of penguins can be messy.

It is not often that your day is complete before 4.45 am, but this was the day.

Take an Online Photography Course with David Yarrow and learn how to take stunning Wildlife Photography and the natural world.