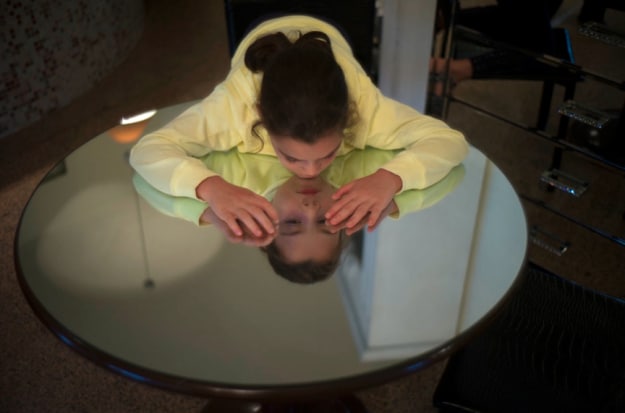 This day 2 years ago I visited Cortona to see my exhibition in the Cortona On The Move photo festival. Cortona is a beautiful hill town above a plain between 2 ranges of hills. On the other side of the far range is our valley and it always surprises me how different each terrain is even when they are only a few miles apart.
At lunchtime we entered a local restaurant, and immediately inside the front room I saw this image of a young girl in her dream state of wonder and illusion, like an Alice in Wonderland girl fallen into the depths of the mirror’s space, except this one seemed to be loving herself in a way that brought to mind all seductive and playful charms of the putti one sees hovering in the corners of Italian paintings, or holding up the edges of the ceilings in palazzo rooms.
These associations I find myself making come instantly to mind, and there is barely a moment between seeing what’s in front of me, raising my camera, and reading the underlying text that the image gives off. And reading it this way it doesn’t mean that it is true, or anything that even makes sense, it is just what comes at me from the world, and which only I am susceptible to, and I never expect anyone else to read it in the same way I do, but I am helpless in front of these associations.
I have long felt that it is a way of seeing that I have tuned my instrument to, and that by this associative verbalizing, even if it is just a flash thought, I can then see more clearly what its affinity is to me. I have long believed that if you can say it you can see it. 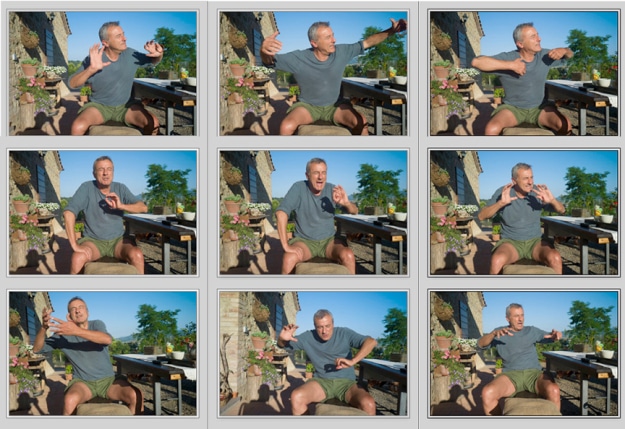 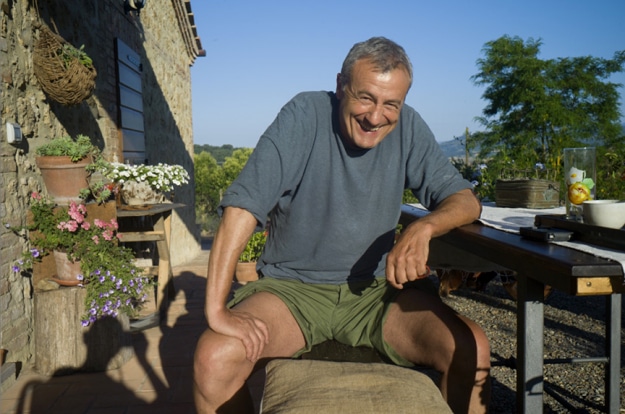 Yesterday I mentioned that sitting around and talking could often produce spontaneous portrait studies, and that like street photography, if one was observant some rich gestural images might come from it. The next day our friend Gianni stopped by, as he does almost every day, to hang out and play with us as we have been doing for 20 years now.
The positions we were sitting in gave me this chance to really watch the Italian in him in action, with every nuance of his story needing an expressive gesture to move the opera along. What the story was about I can no longer remember, or as the Italians say, “chi se ne frega,” who gives a damn, anyway.
And then, when he was done, he gave me the sweetest, most sheepish look, which endeared him to me even more. 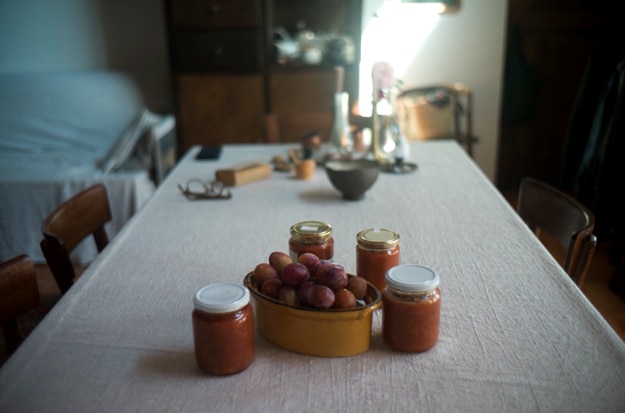 A friend gave me a basket of ripe plums. This type of Italian plum is called “Nuns Thigh.” Who could resist. I made plum preserves and had plenty left over for some luscious bites. Not to mention a chance for a still warm still life. 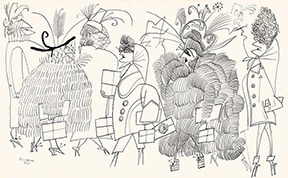 Every so often I am reminded by something I see right in front of me, of Saul Steinberg, that great New Yorker magazine artist who did the famous poster showing New York City and the avenues going west to the river and then beyond to the bleak view of the distant American emptiness. His characters often were shown in ridiculous outfits and social postures which showed us all how crazy we actually look while we think we are pretty sophisticated. 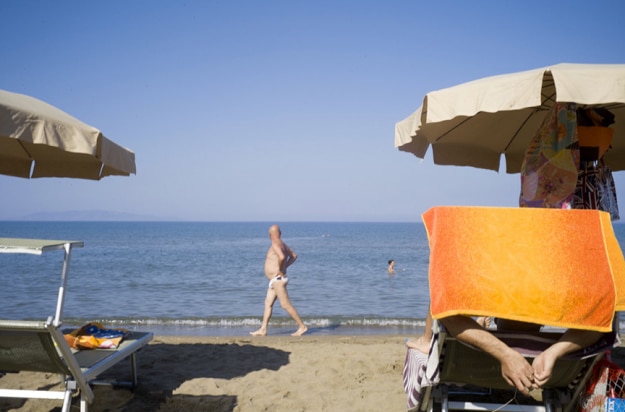 So when I see someone like this guy on the beach, a faceless, strangely shaped human being, Steinberg pops into my head. Of course I love the pair of hands under the sunny towel and the way they relate to the figure of the man, although I couldn’t explain how they relate, except to say to me they made sense, photographic sense, in that something happens when I look from one to the other, a kind of connectivity between the hands that you don’t see and the pair that you do. 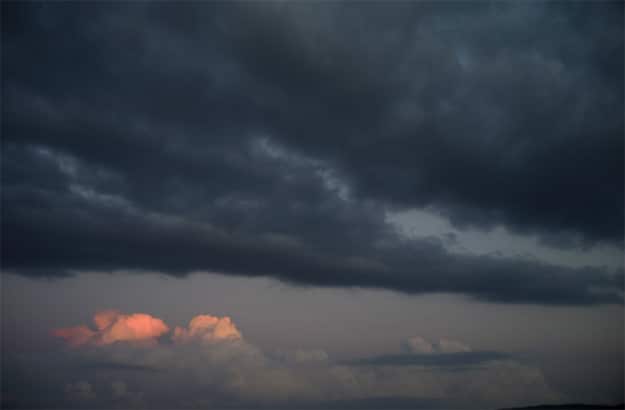 Just sitting at a friend’s dinner table watching the oncoming dusk slowly draining the light of the day. A long meditation on change. Light, gliding from the fullness of white clouds to the saturated last licks of color at their tops, and then, right before my eyes, it’s gone, like a magician showing his trick and we not being able to see it – that’s magic! Not seeing the change while looking at it.
Nature is the magician beyond measure, and every day the phenomena of light shows us such variety and delicacy as to fill our hearts with wonder or joy. 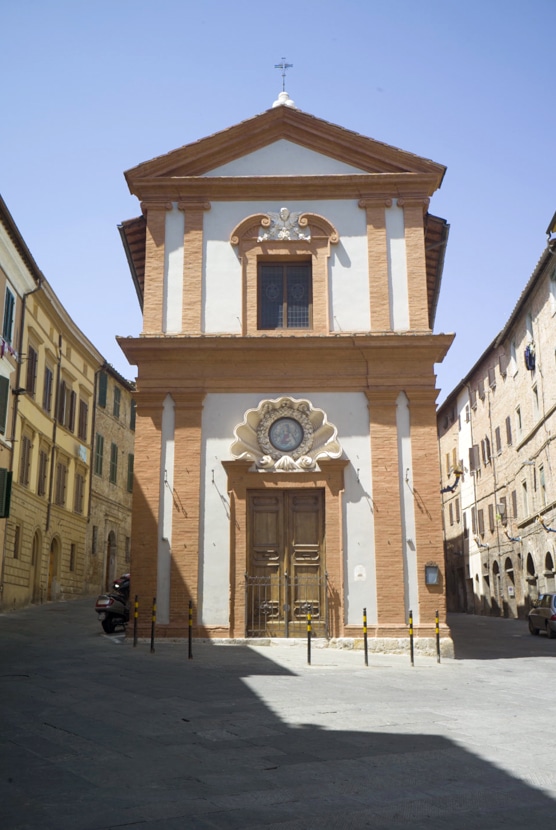 Some spaces just ring with authority. Even when they might be just a small neighborhood chapel, or a convent, or school, or some old ruin that has the aggregate of time on its side. Coming into this neighborhood in Siena I was surprised at how the building and the ‘wings’ of the subtly curving street so perfectly related to the two doorways of the church, one with that seashell with a madonna or saint, and the other with the wings over it.
Little moments of pause and reflection have been the part of carrying a camera that I probably have learned the most from. Just about everything I know I have learned from photography.

If you feel inspired by Joel Meyerowitz’s posts, check out his online photography course.